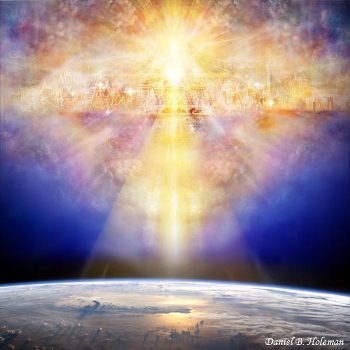 In this article I want to address two issues.  First, is Joel McDurmon asserting in his debate with Don Preston that Abraham did not inherit the land promise and if we say that he did, then according to Acts 7 – the Bible contradicts itself.  According to McDurmon if Abraham didn’t inherit the land or the earth (Rom. 4:13) that must mean that he will be raised (along with everyone) in a physical body upon the promised land and earth in the future.  The second issue is to demonstrate that according to futurists, the land promise made to Abraham is climaxed and fulfilled under OT typology through the exodus and then when David took the city of Jerusalem and God dwelt among His people safely 2 Sam. 5:6ff.
Let’s first address the issue of Abraham allegedly not inheriting the land.  Of course we couldn’t help but think we were debating a Premillennial Dispensationalist when we heard McDurmon’s comments on this subject!  Below is a chart harmonizing the OT record and Acts 7 demonstrating that there is no “contradiction” and that Abraham did inherit the land through his seed.  Is this not ironic that this is a reformed refutation of the Premillennial Dispensational view?!?:
I. The major Bible texts of the three promises

Contrary to McDurmon, there obviously is no “contradiction” in Acts 7 from the rest of Scripture.  And of course the exodus or land promise under the OT exodus didn’t reach its climax until the conquest — 40 year reigns of David and Solomon took place.  R.E. Nixon places the OT consummation or climax of the exodus with David taking over the city of Jerusalem and thus Yahweh having a place to dwell in the midst of His people:
“In the earlier part of the Old Testament there are three outstanding moments to which the later writers look back. They are the call of Abraham, the Exodus and the reign of David.5 To Abraham there was made the promise of numerous descendants and a land for them to live in as their own.6 That promise was not fulfilled in his lifetime.7 The Exodus was the event which constituted the descendants of Abraham a nation and the purpose of the Exodus was to bring the people eventually to the promised land of Canaan.8 But the mere crossing of the Jordan into Canaan did not accomplish the purposes of God, for the land had to be conquered. It was not until the time of David that it could truly be said that Israel was given security from all her surrounding enemies.9 Moreover they had to find a place in which Yahweh their God would choose to make His name dwell,10 and therefore the capture of Jerusalem by David was in a sense the climax to which the whole Exodus-event was leading.11[2]”
Of course the 40 year wilderness wanderings and David and Solomon’s 40 year reigns of conquest and rest of the land and city of Jerusalem typified the new exodus “this generation” under Christ and the Church – being roughly between AD 30 – AD 70.  The unclean spirits were driven from the land, Satan crushed “shortly,” and the kingdom taken from OC Jerusalem and given to the new nation bearing the fruits thereof – ie. the glorified and established NC Jerusalem by AD 70.  The message of the book of Hebrews and that of the book of Revelation teaches us that the establishment of the land/city promise made to Abraham and OC Israel was fulfilled at Christ’s Second Appearing at the end of the OC age in a “very little while,” “shortly,” “at hand,” “quickly” “about to” AD 70 time period (Heb. 3-4, 9:26-28—10:37—13:14YLT/WEY/Rev. 1:1—20-22:6-7, 10-12, 20).  According to the book of Hebrews, all the “enemies” of Psalm 110 were “made his footstool” when a fire was “about to” (their “wait”) “consume” them at “the Day” which was approaching when He would” judge His people” in AD 70 (Heb. 10:13, 25, 27, 30, 35-37).  Paul in 1 Cor. 15 identifies the enemies of Psalm 110 being put down within the same time frame as that of the author to the book of Hebrews — that is at Daniel’s “the time of the end” or Jesus’ “the end of the [OC] age” “this generation” — with the last enemy, “the death” to take place at Christ’s “THE parousia” when the OC “THE Law” would be fulfilled (Dan. 7, 9, 12; Matt. 24-25/1 Cor. 15:23-57).
McDurmon is in print teaching that Jesus’ and Paul’s “this age” is the OC age, and the “age to come” is the NC age which arrived when the resurrection of Dan. 12:2-3/Matt. 13:39-43, 49 took place in AD 70.  He also affirms that the parable of the 10 virgins was fulfilled at Christ’s coming in AD 70 – this also being the time Abraham feasted with the Gentiles when the kingdom came (Matt. 8:11; Matt. 25:1-31).  But the wedding feast takes place when “the death” is defeated and the resurrection takes place in “the [NC] age to come” (Isa. 25:6-8/1Cor. 15:54; Luke 20:34-38)!  Abraham was “perfected” and received a “better resurrection” with the first century church (Heb. 11:35, 39-40).  The NC inheritance of the “better things” of a Heavenly Country/Zion/City/Kingdom in the book of Hebrews are ALL spiritual and were “about to” arrive at Christ’s imminent approaching “Day” return.
The book of Revelation ends with the New Jerusalem coming down and clothing the church while upon the earth.  She is secure in the City of the Living God/The New Jerusalem dwelling with God where the curse is no more.  McDurmon and DeMar teach us that the imminent time texts throughout the book of Revelation instruct us that the NC New Jerusalem came down from heaven to earth in AD 70.  The Biblical view is that the OT promises were partially fulfilled in the OT under the OC, but needed to be fulfilled in the spiritual or “true” realm — thus the fuller fulfillment “in Christ” under a new or second exodus.  These “true” and “spiritual” fulfillments came at Christ’s Second Appearing in AD 70 and came to a mature state – in which the eschatological goal or end was realized.
Romans 4:13/1John 2:17/Revelation 21:1/2 Peter 3/Heb. 12-13:14
It has been asserted by some that we have not dealt with the Greek word kosmos/“world” in Romans 4:13 as it pertains to the inheritance of Abraham and his seed.  Therefore, I would like to turn my attention briefly to this text so as to identify what “world” this is.
As American Vision’s Joel McDurmon and Gary DeMar know full well, kosmos has a wide variety of meanings in the NT.  The two that I will focus on here is kosmos in relation to the Great Commission being fulfilled in the NT, and kosmos being used as Israel’s OC world with the spiritual inheritance of the NC world taking its place by AD 70 — thus being a blessing and healing to the nations in the NC age.
The Great Commission was fulfilled in all the “world”/kosmos by the first century – God’s new  Israel by AD 70:

There is a serious problem for men like G.K. Beale who attempt to connect a literal phase to the new creation with and when the fulfillment of a global Great Commission takes place — when he appeals to NT passages which clearly teach the gospel had already been preached into all the world in the first century.  All of these terms Jesus used for the Great Commission were used by Paul in the past tense to communicate the commands of Jesus as being fulfilled within his generation.  Let’s briefly examine Colossians 1-2.  Paul writes, “…which things are a shadow of those things about to come. But the body belongs to Christ.” (Cols. 2:17WEY).  This imminent time text is consistent with the immediate context of the Great Commission having been fulfilled by Paul in the first century Mt.24:14/Mark 16:15/Col.1:5-6, 23. The great commission here is the fulfillment of Gen.1:28 and paradise is being restored and about to come in its fullness. G.K. Beale makes the connection:

[1] Three Promises to Abraham Fulfilled! http://www.bible.ca/d-3-promises-to-abraham.htm Special thanks to Michael Bennett for pointing me to these helpful charts.

[4] The time of fulfillment to bring things both in “heaven” and on “earth” under Christ had come (Ephs. 1:9-10). Puritan John Locke I believe correctly understood “heaven” and “earth” here as discussing Jew and Gentile, “If our Tanslators have render’d the sense of ἀναϰεϕαλαιώσασθαι, right, by “gather together into one,” it will give Countenance to those, who are inclin’d to understand, by “things in heaven and things on earth,” the Jewish and Gentile world…” “…the Apostle’s Design here, where he says in express words, that Christ makes τὰ ἀμφότερα ἕν, makes both Jews and Gentiles one, Eph. ii. 14. Now, that St. Paul should use heaven and earth, for Jews and Gentiles, will not be thought so very strange, if we consider that Daniel himself expresses the nation of the Jews by the name of heaven, Dan. viii. 10. Nor does he want an example of it, in our Saviour himself, who, Luke xxi. 26, by “powers of heaven,” plainly signifies the great men of the Jewish nation; nor is this the only place, in this epistle of St. Paul to the Ephesians, which will bear this Interpretation of Heaven and Earth: he who shall read the fifteen first verses of chap. iii. and carefully weigh the Expressions, and observe the drift of the Apostle in them, will not find that he does manifest Violence to St. Paul’s sense, if he understands by “the Family in Heaven and Earth,” ver. 15, the united Body of Christians, made up of Jews and Gentiles, living still promiscuously among those two sorts of people, who continued in their unbelief.” John Locke, A Paraphrase and Notes on the Epistles of Paul, Vol. 2, ed. Arthur W. Wainwright (New York: Oxford University Press, 1987), 618. John Eadie cites others who take “heaven” as Jews and “earth” as Gentiles, “…according to Schoettgen, Baumgarten-Crusius, Ernesti, Macknight, Schleusner, and Koppe—Jews and Gentiles;…” John Eadie, A Commentary on the Greek Text of Paul’s Letters To the Ephesians, (Solid Ground Christian Books, 2005) 55.
Locke trying to be faithful to Paul’s flow of thought and argumentation in Ephesians, considers the idea of Paul appealing to the planet earth here in 3:9, would be to portray Paul as a “loose writer,” and “weak arguer.” Locke understood the phrase “God created all things” of Ephesians 3:9 to be the new covenant creation, “Now if the Creation of the material World, of this visible Frame of Sun, Moon, and Stars, and heavenly Bodies, that are over us, and of the Earth we inhabit, hath no immediate Relation, as certainly it hath not to this Mystery, this Design of God’s, to call the Gentiles into the Kingdom of his Son, it is to make St. Paul a very loose Writer and weak Arguer, in the middle of a Discourse which he seems to lay much stress on, and to press earnestly on the Ephesians (for he urges it more than once) to bring in things not at all to his purpose, and of no use to the business in hand. We cannot therefore avoid taking the Creation, and things created, here to be those of the new Creation, (viz.) those of which the Kingdom of Christ, which was this new Creation, was to be made up, and in that Sense,…” “…who created all things by Jesus Christ, is a reason to shew why God kept his purpose of making the Gentiles meet to be Partakers of the Inheritance of the Saints, or as he expresseth it, ch. 2:10. that they should be his Workmanship created in Christ Jesus unot good Works…” Locke, Ibid., 641 (bold emphasis added)